Ever since seeing that episode of Ugly Betty, where Wilhelmina gets a fish 'pedicure', I have wanted to try it. So I was pretty thrilled when my mum bought us a couple of groupons for a little fish therapy. 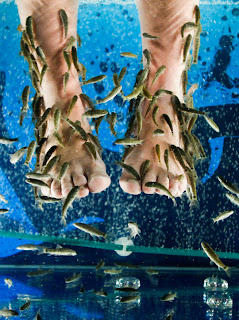 We went to Le Fish Spa in Blouberg and I have to say, while the pedicure and fish therapy were great, the service was not. The spa was being used by a film crew, delaying our appointment by 45 minutes, for which the spa was not particularly apologetic! Also, as an aside - I am a busy working mom on a fairly tight budget, I don't often get to do pampering things, so when I do I want the full experience, so offer me a cup of tea, for crying in a bucket, or at least a glass of water! I hate looking forward to a spa experience, and then sitting there for an hour dehydrating. After all, isn't hydration the cardinal beauty rule? but I digress... 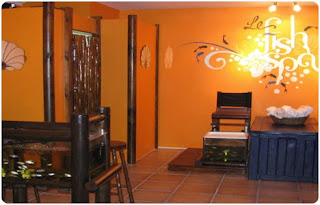 Back to the pedicure. It started with us putting our feet in a foot spa, after which our nails were filed and buffed and cuticles trimmed, followed by a foot scrub. I REALLY enjoyed the citrusy foot scrub, which both smelt and felt invigorating. Then it was into the fish tanks - eeek! Even though I was really keen to try this it still took me a couple of attempts to work up the courage to put my feet in. The tank had about 6 fish in it and they were pretty big! I'd say about 15 to 20 cm each - not exactly the little nibblers I had imagined. Once you get over the initial 'eek!' though, it's actually fine. Their little mouths feel like soft sandpaper suctions. The only time it borders on painful is if they nibble on your ankles or legs, which they do occasionally, but its not bad. Actually, worse is when they get the ticklish spots under your feet! Trying to sit still so they can do their job when your instictive reaction is to pull your foot away is actually quite challenging! So, after 20 minutes of fish time we dried off our feet and then had a short foot massage, about five minutes a foot. Again I REALLY enjoyed this part, but then my feet are very sensitive and I LOVE foot massages :)
Overall, my verdict is that the experience was fun, but to get the most out of this therapy you probably have to do it at least bi-weekly, which can get pricey fast. I don't think I will bother to do it again, but if you get the chance to give it a try, then I say jump in with both feet :)
Posted by Natashia at 10:55 No comments: